This page contains my artist's statement as well as a listing of my exhibits and artistic accomplishments for the past decade. There is a blog link too.

In the course of my life, I have been many things—waitress, teacher, PhD graduate, citrus farmer, author of books and articles, even Deputy Assistant Secretary of State. Woven throughout, regardless of what I was doing to earn a living, there has been the thread of art.

My introduction to the art world was through theater at age 14, in 1963, when I began taking lessons and working at the Dallas Theater Center. I fell in love with costumes, set design, and drama. My experience onstage helped me immeasurably in understanding how an audience visualizes a scene, and has informed my painting,  photography, and filmmaking.

My first oil painting, in 1963, was of the Kalita Humphreys Theater. Oil on canvas was my first medium and I continue to paint, both with oils and acrylics. My painting is perhaps best categorized as Expressionistic, but it also often has subject and form that is closer to Cubism. Although color and energy can be an objective in itself for me, many of my works give viewers a focus, form, or message that has counterpoint in reality. But I prefer not to give my painting style a label, as I am in agreement with the Chinese artist Shen Weiguo, who said, “As soon as you define yourself as this or that, you stop evolving.” 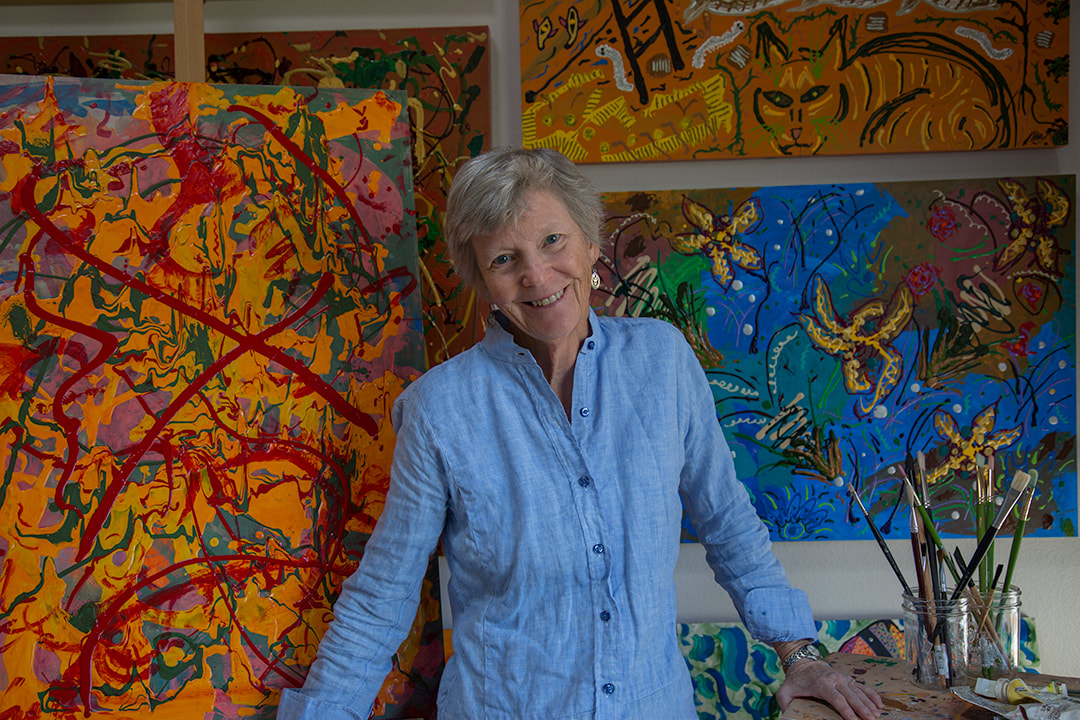 I am keeping an occasional blog about my artwork here.

In addition to several solo exhibitions, my artworks have been included in exhibitions nationwide. I have participated in a number of juried art contests and exhibitions. Key awards, exhibits, and artistic accomplishments for the past decade are listed below, including in some cases the name of the juror(s).

2021
​Aside the Wharf was selected by Juror Andrea Karnes, Senior Curator, Modern Museum of Fort Worth, for the 36th Texas & Neighbors Regional Art Exhibition. It is one of only 82 artworks chosen from 771 submitted to the competition by 283 artists.
2020

Cat Dream was chosen by Juror Kristin Rivas to be included in the 35th Annual Texas & Neighbors Regional Art Exhibition. Only 85 works were selected from 883 entries into the competition.

September – The film I authored and produced, Revenge In Kind, began streaming on Amazon, iTunes, and other platforms.

Most of this year was devoted to to the production of my feature film, Revenge In Kind.

September – Solo exhibit entitled “One Step Beyond” held at the City Arts Center in Mesquite, Texas.

February - Food For The Gods and Spinal Rupture were selected in a juried competition for the Citation Exhibit held at the Mesquite Arts Center, sponsored by the Texas Visual Arts Association. Jurors were Vicki Mahan, Chair of Art and Photography at Richland College, and Matt Anzak, Art Director for LuminArte Gallery. There were 147 entries to the contest, of which 44 were selected.

June - Panicle was selected in an international competition and was exhibited at the Yeiser Art Gallery in Kentucky. There were 893 entries, of which only 75 were selected by juror Sarah Sudhoff, Executive Director of the Houston Center for Photography and former photo editor for Time magazine.

June – Portapotty was exhibited at Artspace 111 in Ft. Worth. The juror, artist Vernon Fisher, chose only 76 works from a total of 765 entries to the photography contest and exhibition.

April - Will To Live received the award of Honorable Mention in the exhibit “Celebrate The Earth” curated by artist Shari Hornish at the Texas Visual Arts Association Gallery.

May - Molten Train was awarded Honorable Mention in the international photography competition and exhibit entitled “Transportation,” sponsored by the New York Center for Photographic Art. Over 700 images were submitted; only 40 were selected as winners by the juror, renowned photographer Lester Lefkowitz.

June - Four Flights was selected by juror Kurt Mutchler for inclusion in an exhibit at the PhotoPlace Gallery in Middlebury, Vermont. Over 900 entries were received in the international competition, only 40 of which were selected for the exhibit. Mutchler was Executive Editor of Photography for National Geographic Magazine. My image was chosen for the front of the exhibition’s book cover.

July - Exhibited Icemen in the 2014 Texas Visual Arts Association show at Medical City where it was honored with the “Best In Show” award. The judge was Liliana Bloch, Dallas art gallery owner.

July/August - Troupe was selected by juror Andrea Mellard for the "The Portrait: Up Close and Personal" exhibit at MPLS Photo Center in July & August 2012. There were over 1,600 entries to the contest, from which only 75 images were selected for the exhibit.

September - Palm At Dawn was selected by juror and PhotoPlace Gallery owner Kirsten Hoving for inclusion in the exhibition “In Praise of Trees.” There were 1280 images entered in the competition, from which only 75 were chosen as winners.

May - City Living was exhibited at the Minneapolis-St. Paul MPLS Photography Gallery as a winner in the national competition, “Ambient Light”. Over 1600 images were submitted to the competition; juror Jim Brandenburg, a photographer for National Geographic, selected only 70 images as winners for the exhibit.

June – City Living was selected by juror Mary Ann Redding in a nationwide competition for an exhibit held at the Yeiser Art Gallery in Paducah, Kentucky. Redding was a professor at Santa Fe University of Art and Design.

July/August – Icemen and Troupe were selected by an international panel of judges (John Guider, Nathalie Daoust, and Laura El-Tantawy) as winners in the Paducah Photo Contest. There were 550 entries from around the world, from which only 74 were selected. The exhibit was held at the Yeiser Art Center in Kentucky.

December – Jellyfish and Self-Centered, were selected by juror Christiona Owen as winners in the Professional Women Photographers International Photography Competition. Over 1100 images were entered in the contest; only 83 were chosen for the exhibit. Jellyfish was honored as a “Juror's Selection.” Owen was the Director of the Steven Kasher Gallery in Manhattan and worked with Guggenheim Asher Associates, international art advisory consultants.

Spring - Move Back was selected by a panel of judges as a Finalist in the 32nd Annual Photography Contest co-sponsored by Photographer's Forum magazine and Sigma. The jurors were Ann Cutting, Gene Strickland, and Sherri Taylor. Over 12,000 images were submitted to the contest from 62 countries; 1,560 images were selected and were published in Best of Photography 2012.

December - Waiting was selected by juror Madeline Yale to be in the MPLS Photo Center "Off the Cuff" exhibit in Minneapolis. There were 1,100 entries to the competition from photographers in 12 countries, only 73 of which were selected. Madeline Yale is a curator and photography consultant to auction houses in the Middle East and London, and was formerly Executive Director for the Houston Center for Photography.

January – On Edge was exhibited in the MPLS Photo Center “UrbanView/Rural Sight” show. There were 1,200 entries to the contest, of which only 80 were chosen for the exhibit by juror David Travis, former Curator at the Art Institute of Chicago.

February - Culture Clash earned Honorable Mention in the 2011 International Photography Competition sponsored by the Professional Women Photographers organization in New York City. Pulitzer Prize-winning photojournalist Ruth Fremson was juror for the competition. Over 1,000 photographs were entered in the contest, of which only 52 were chosen.

June – Body Language was exhibited in the Paducah Photo National at the Yeiser Art Gallery in Kentucky. Only 76 photographs were selected by juror Karen Irvine from over 1,000 entries. Irvine is Curator of the Museum of Contemporary Photography in Chicago.

August - Move Back was selected by juror Andrew Binkley to be in the Kauai Society of Artists annual competition, where it was given the Paul Yardley Award for Excellence.

April – Retreating Zebras and Tidy Kiosk were chosen for inclusion in the Paducah International Photo Contest and Exhibit. There were 1,190 entries; only 101 were selected by juror Michael Johnson, Professor of Photography at Murray State University.

July – Grandfather and Me was exhibited at the annual juried exhibit “Byte Me” sponsored by the Kaua’i Society of Artists. It received the Invitational Award for excellence.

November - Cart 505 and Hard Times Early were chosen by juror Ken Merfeld for inclusion in the Kentucky National 2010 photo exhibit. Over 1,000 images were entered in the contest; only 50 photographs were selected for the exhibition.

September – Solo artist show at the Kaua’i Society of Artists’ Gallery at Kukui Grove Mall in Hawai’i.
December - Tokyo Tower was selected by juror Carol McCusker for inclusion in the Wall Space Gallery “Down and Out” exhibit in Seattle in January 2010. The exhibit also travelled to the 23 Sandy Gallery in Portland during February. There were over 1,000 entries; only 45 were selected for the exhibit.